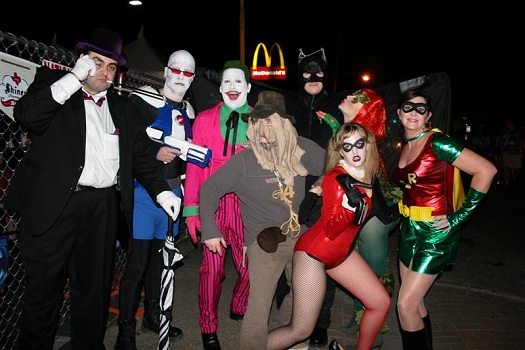 Source: The Montrose Crawl, Attendees living it up at last year’s crawl

The biggest, the craziest, the most enthusiastic party this Halloween isn’t at your friend’s neighbor’s house. It isn’t even downtown. It’s in Montrose, and it spans the area on Westheimer from Dunlavy to Montrose Blvd. Yes: for the eighth year in a row, the Montrose “Monstrose Pub Crawl” is where everybody’s going to be this Halloween!

As it is every year, there are no covers at any of the locations, no tickets for the crawl, and drink specials galore. Prizes for best outfits will be awarded at each stop—and last year’s winners were really spectacular! Chris Shepherd of Underbelly is the “Grand Crawler” of the evening.

But the best, most spectacular part of the Montrose Pub Crawl is that a portion of the drink sales will be donated to the Houston Area Women’s Shelter, benefiting victims of domestic violence. Donations help to fund a 24-hour lifeline-hotline, a 120-bed emergency shelter, counseling for domestic abuse survivors, and teen programs to help end this harrowing cycle for good, according to the Monstrose Pub Crawl’s Facebook page.

The Monstrose Pub Crawl is sponsored by Free Press Houston, Santo (the official beer of the pub crawl), Jim Beam (the official whiskey), Izkali (the official tequila), Party Boy, Nightmare on the Bayou (see our Haunted Houses blog post!), with special endorsements by Red Bull and Uber! What are you waiting for? Confirm that you are attending on Facebook then, strap on your sexy Freddie Kreuger get up and get crawlin!

Take Your Pick At The Best Damn Food Truck Festival Ever!
Taste What Houston Food is All About at Underbelly!