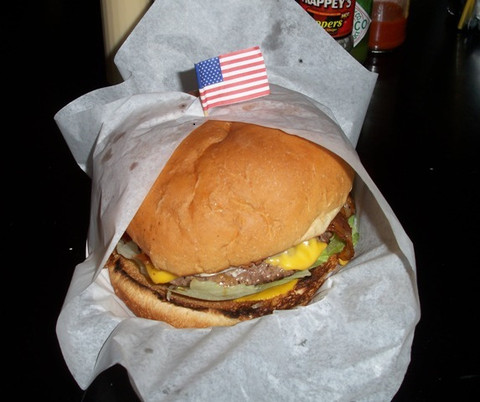 Have you seen a little blue and white shack on your recent Houston travels? One of the things that Bubba’s Texas Burger Shack owners Erin and Allison Reed hear the most is “I’ve driven by this place for years, and finally decided to stop in.” It is not the prettiest location for a restaurant, but that doesn’t stop Bubba’s from making delicious, Texas-sized burgers.

Don’t let their size fool you! Even though Bubba’s Burger Shack is quite literally a shack under the shade of the Westpark Tollway, it has been serving Houston great burgers since 1985. The construction of the surrounding highways, hurricanes, and other events couldn’t force Bubba’s to relocate so they remain standing proud under the highways.

Bubba’s specialty is the Buffalo Burger, which has many health benefits versus the regular beef hamburger most people are used to. Buffalo are grass-fed animals, and their meat is low in cholesterol and naturally lean. Aside from their famous Buffalo Burger, they also serve great hot dogs, salads, and massive baked potatoes.

Next time you pass the little shack under the Westpark Tollway, pay Bubba’s a visit for a big Texas taste. There is something for everyone!

Where to Eat in Houston

A Thriving Place to Shop, Eat, and Live in Houston
Paul Mitchell, The School Ready To Prepare You For Success!