Driving from Houston to Dallas takes approximately 3 hours and 30 minutes on a traffic-free day. And while that isn’t an awful drive to make on occasion, those who make the trip frequently for work would much prefer to have their hands and attention free to make the best use of their travel time. Many professionals opt to take the Amtrak train from Houston to Dallas, but you can expect that to take approximately 5 hours. Sure, that means an extra hour and a half to get work done, but do you really want to spend more time en route than necessary? An airplane would only take one hour or so, but that doesn’t account for airport security, frequent delays or the hefty ticket price that comes with flying.

Texas Central, a private company, understood this and knew the technology existed to give travelers the commute they had been dreaming of. With technology and guidance from Japan, the proposed bullet train will be making its way stateside. This is the safest technology out there. With 50 years of operation in Japan, it has never had a crash or fatality due to operations. The Houston bullet train will travel at speeds of up to 205 mph, taking only 90 minutes to arrive in Dallas. Talk about efficiency.

But building this rail doesn’t benefit just the riders. The environment will get a break from traffic congestion, too, with the bonus of creating less pollution than what is produced by a plane. Additionally, the project is expected to create an average of 10,000 jobs each year over the project’s 4-year construction period. Once complete, 750 full-time jobs will be open along each route to support the railroad’s operations.

This will quickly become the preferred method of travel between these two cities. According to Texas Central, trains will run every 30 minutes during peak hours and every hour during off-peak times. No more twiddling your thumbs waiting for the next train or flight to depart. There will be 6 hours reserved each night for maintenance and inspection of the system to keep safety a priority. Plans are set to break ground on the nation’s first bullet train at the end of next year. 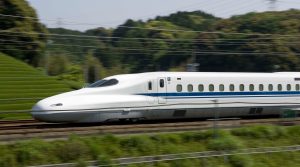