The Orange Show is McKissack’s former residence, which he converted into a veritable shrine for his beloved fruit. He then took the remainder of his property, and with found objects, he welded and built a maze of statues and interesting artifacts, balconies, brightly painted ironwork and arenas for guests to enjoy. 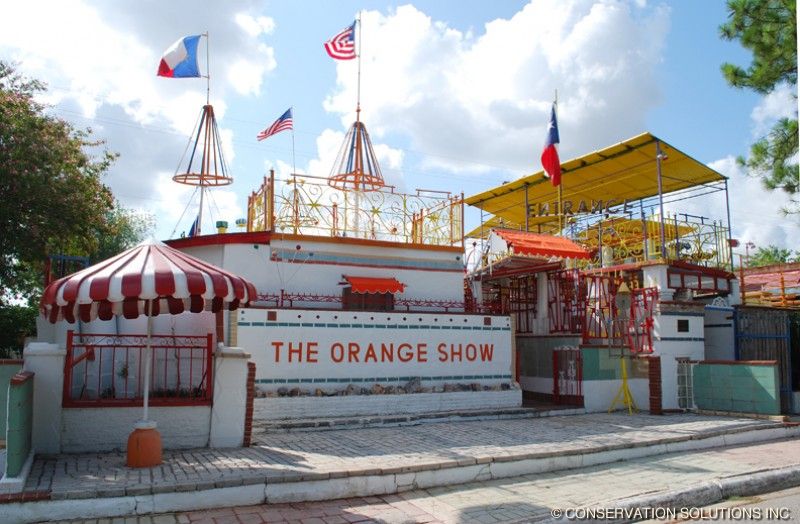 But the really amazing thing is that McKissack transformed his property all by himself over the course of more than 20 years, inspired by the idea that longevity “results from hard work and good nutrition.” Oranges symbolized both for McKissack, who was born in 1902 and transported oranges during the Great Depression. He lived until 1980.

This postman put his stamp on Houston’s arts and culture scene permanently. Since that time, The Orange Show has expanded to include mosaics and murals and, as a nonprofit formed by Marilyn Oshman after McKissack’s death, hosts community outreach programs for at-risk youth, community enrichment art projects, and provides inspiration for folk artists all over Houston.

The Orange Show and their diverse 21 original donors (from members of ZZ Top to the curators of the Menil) have had a hand in over 28 murals in the Houston area. But their most popular outreach effort has been the Houston Art Car Weekend and Parade which has become not just a Houston staple (it all started with the Fruitmobile in 1984) but now attracts participants from all over the world!

Whatever your interests, McKissack’s vision seeks to remind us that he’s not the anomalous postman-next-door, but that everyone’s passion can leave its mark on the world. Mark your calendar to pay The Orange Show a visit once it’s open on March 1, 2015 for its regular weekend schedule of 12-5 pm.

art, museums, The Orange Show, Things to do in Houston